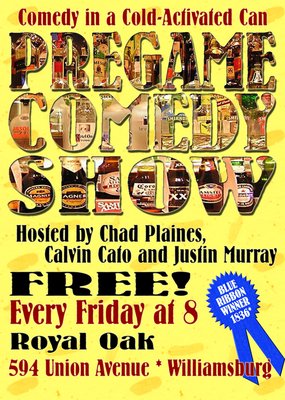 What better way to prepare for a night of debauchery than to get drunk and steal jokes from slightly drunker comedians? Well that’s the philosophy at the Pregame show. The weekly comedy showcase at Royal Oak every Friday is brought to you by Justin Murray, Chad Plaines and Calvin Cato. Watch some of the best comedians in New York City perform for free all while drinking too many $5 beer & a shot specials. Past performers have appeared on HBO, Comedy Central, VH1 and MTV. Also, the show is intercut with trivia so lucky audience members can win free drinks. How good does that sound?! Plus did we mention there is also FREE WINGS!!