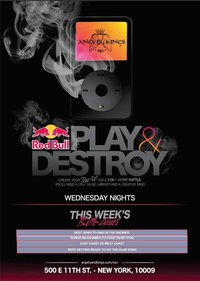 Do you think the music on your MP3 player is the best around?? Prove it! Come join  for a one on one music battle! Just bring your MP3 player and challenge 16 other guest DJ’s as they battle it out.

CATEGORIES
– The best song to sing in the shower!
– Songs I’m ashamed of having on my ipod!
– East Coast vs West Coast
– Getting ready to hit the club song!

RULES:
– Build a playlist with your best song for each category
– You’ll get to play each song for 30 seconds
– Winner is judged by crowd response & ties are decided by another song
– You must create a DJ name for yourself in order to compete.
(Props, costumes, gimmicks are allowed and encouraged)
– You cant use the same song twice.