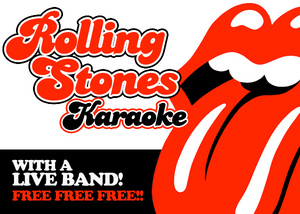 Audiences who see this band aren’t sure which they can’t believe more – their eyes or their ears. Not only does the band nail every classic Rolling Stones riff, howl and thump, the members could be stunt doubles for Jagger, Keith Richards, Charlie Watts and Ron Wood.

The band features a revolving cast of rough-and-ready players led by twin guitar crossfire that is reminiscent of Richards and Wood plus a galloping rhythm section to match Watts and Bill Wyman. They also sport a shimmying lead vocalist who helps to guide the guest singers through each song.

Rolling Stones Karaoke is great at performing straight-up Stones tribute shows too, but they are most well-known for their high-energy karaoke sets that let audience members take center stage. This makes for audience experiences tailor-made for cell phone pictures, high-fives and colorful tales around the water cooler the next day.