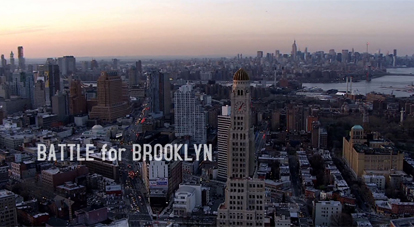 Rooftop Films continues its battle against the Atlantic Yards Project with a Free Screening of the documentary BATTLE FOR BROOKLYN.

In 2003 filmmaker Michael Galinsky read a NYTimes article about a New Jersey Nets stadium coming to Brooklyn. Eight years and three lawsuits later, the Forest City Ratner vs. The People vs. The State of New York vs. The Borough of Brooklyn saga has played out for all of New York City to bear witness. A main character in this real estate tragedy has been Daniel Goldstein, the Prospect Heights man who refused to be bought out by Ratner developers. His organization, Develop Don’t Destroy, led the anti-Atlantic Yards movement and mobilized thousands of people toward his cause.

Battle for Brooklyn starts at the very beginning of this debate and follows it through its devastating conclusion. We see how Goldstein’s life was upended when he took on Ratner, and how he changes over the course of this near decade long struggle. New Yorkers pride themselves on being stubborn and vocal, and Goldstein certainly earns this pride. If you’re a Brooklyn resident who heard about all the hoopla but didn’t understand what people were actually fighting for, now is your chance to learn about the (anti-) development in your own backyard.

Of course people want more jobs and affordable housing in their communities. We should have those things without question; they are worth fighting for. Battle for Brooklyn sheds light on the realities of the promises made by Forest City Ratner, however, and shows us how those empty pledges divided our unified Borough. The brilliant and fiery Councilwoman Leticia James leads the charge, challenging the “backdoor deals” that eliminated local city involvement from Atlantic Yards and exposing the twisted truths about the effects this development will have on our community. Though it may appear that the battle is lost, the story, as we see here, is far from dead.