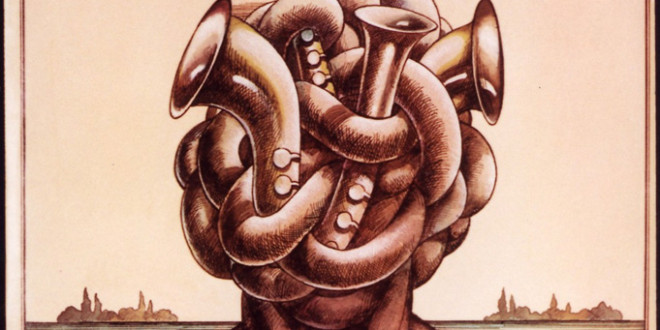 Rooftop Films THE CASE OF THE THREE SIDED DREAM

THE CASE OF THE THREE SIDED DREAM (Adam Kahan | 87 min.)
A multi-instrumentalist whose music was shaped as much by intense reverie as political zeal, Rahsaan Roland Kirk’s innate virtuosity completely altered the way jazz was perceived, while simultaneously forcing a generation of musicians to rethink their entire approach to playing. Weaving seamlessly between interviews with those who knew Kirk and footage of his stunningly visceral live performances, Adam Kahan’s meticulously crafted documentary explores the legacy of this relentlessly innovative performer.

Blind from infancy, Kirk’s reality was underpinned by an understanding of the world around him, which was rooted primarily in sound. Through communicating sonically with his surroundings, Kirk developed a unique ability to see in music, as everyday items were re-imagined as instruments and each seemingly insignificant noise revealed its own rhythm and cadence. It was in dreams that Rahsaan Roland Kirk’s most brilliant visions—such as playing multiple horns at once—would often be granted. Quoted many times as claiming to belong to the ‘Religion of Dreams’, Kirk’s playing, while somehow otherworldly in its inimitable dexterity at the same time came to embody those dreams, in the same way as his instruments became extensions of his own body.

Interspersed with interpretive animation sequences which mirror the quixotic ethereality of Kirk’s music, Three Sided Dream provides a poignantly realized account of a musician who despite being blind and paralyzed from the age of forty, remained unwavering in his commitment to exploring the contours of the sonic landscape until the day he died.

Regardless of whether you are familiar with the music of Rahsaan Roland Kirk, Three Sided Dream is a fascinating documentary which deftly encapsulates the music in all its raucous dynamism, attesting to the energy which emanated from his every note. Prior to the screening Rooftop is also delighted to present a special live jazz performance.

AKUA DIXON QUARTET
AKUA DIXON, Cellist-composer-Conductor, is a native of New York City. A graduate of the famed H.S. of Performing Arts, she studied cello with Benar Heifetz and composition with Rudolf Schramm. Akua studied bass concepts with ReggieWorkman and Jazz Practice Techniques with Jimmy Owens, at the Collective Black Artists Institution of Education.

She is the 1998 recipient of “The African American Classical Music Award”, given by the Northern New Jersey Spelman Alumnae Association. Akua performs nationally and internationally at concert halls and colleges, public schools and libraries; at jazz festivals in Chicago , Hawaii , Berlin , St. Lucia, Tri-Sea, North Sea, Pori, Saalfelden, Jamaica, Puerto Rico, Martinique, Guadaloupe, and San Diego, etc. Her music for string quartet has been featured on an eight country, 26 concert tour of Europe and Scandinavia.

Among the many noted artists she has performed with a few are: Duke Ellington, Lionel Hampton, Max Roach,Betty Carter, Ray Charles, Israel “Cachao” Lopez, Eubie Blake, Tony Bennett, Sammy Davis Jr., Diana Ross, Bob Hope, the Temptations, Marvin Gaye, Liza Minnelli, etc. She has been engaged at many Broadway shows, including: Doonesbury, Barnum, La Cage aux Faux, Evita, Jerry’s Girls, The Mystery of Edwin Drood, Cats, and Dreamgirls. Akua has appeared on New York Undercover with James Brown, Mary J. Blige, and B. B. King. Her first professional job was as a member of the famed Apollo Theatre Orchestra.

In 1973, she founded her own string quartet, Quartette Indigo. They have been called “jazz’s leading string quartet” by some critics. The quartet’s repertoire features original works and arrangements of jazz classics, by Akua. Akua’s first release,”Quartette Indigo”, on Landmark Records, received four stars in Downbeat. Her new CD is entitled “AFRIKA! AFRIKA!”, and was released on Savant Records. Critics are now saying that the group “swings madly”.