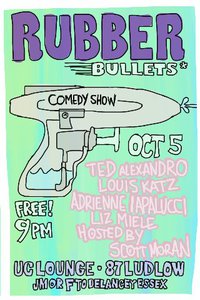 Every week Seattle native Scott Moran hosts some of the best up and coming stand-up comics in New York City. In addition, a comedian always reads a “Super Believable Diary Entry” from a celebrity currently in the news. You may also see the Face-Off! A phrase of death staring contest like competition between two comedians.

Come on down and party with them! It’s always a blast!