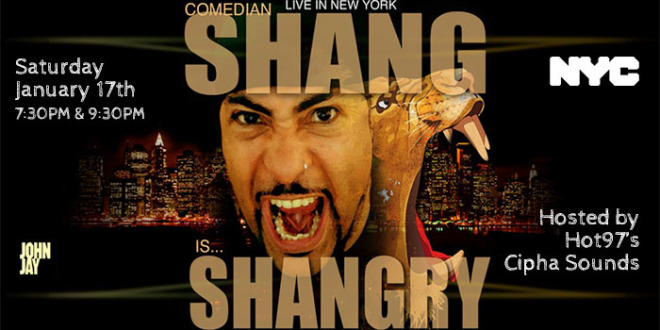 Join host Hot 97’s Cipha Sounds and be a part of the live audience of comedian SHANG’s comedy television special.

SHANG, a transplanted New Yorker whose carefully nurtured evolution from stand-up comedy to socio-political satire gives heavy flight to the spoken and outspoken word. The Famecast Comedy Winner, SHANG has been seen on CBS’S “THE LATE LATE SHOW”, 2 BET’S “COMIC VIEW SPECIALS”, STARZ “1ST AMENDMENT STAND UP”, ABC’S “COMIC’S UNLEASHED”, NBC’S “HEROES”, CBS’S “CSI”, “NCIS”, “QUE’ LOCOS”, and COMEDY CENTRAL’s “LIVE AT GOTHAM.” Also this Fall, you can see him on the new show “Kamkazee Comedy” on FUELTV. With 1.8 million sign ups through his website, SHANG continues to rise to the top of the comedy ranks with his high-profile acting and televised stand up. You won’t want to miss SHANG tear down the house back home in New York City on Saturday, January 17th.