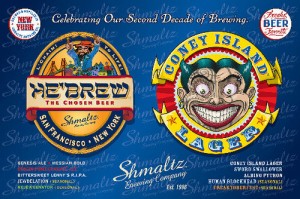 Join the NYC Shmaltz Ringleaders and owner/founder Jeremy Cowan for a special night of beers, books, and schmooze. Good Beer is tapping some rare goodies and year-round HE’BREW and Coney Island favorites – flights, pints, bottles, and growlers will be available for purchase.

Jeremy Cowan will be signing copies of his new craft beer memoir, “Craft Beer Bar Mitzvah”, so you can also get the scoop on the origins of America’s smallest, largest, most award-winning Jewish/Sideshow Freak brewing company in person!