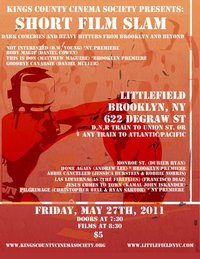 KCCS is finally back at Littlefield in Gowanus to present a night of recent shorts. An overdue sequel to our shorts and music video slam of mid-2010. A handpicked slate of dark comedies, odd romances and heavy hitters from Brooklyn and beyond that tackle tales of redemption, remorse, repression and re-ups.

A door-to-door knife salesman stumbles on a housewife with an alarming need for his wares. An underworld poker game amongst c…ard sharks is interrupted by the second coming of Christ. A drug dealer in 1973 Canarsie has big dreams of making it as a Hollywood makeup artist, if he can convince a young mafioso to ignore the hit put out on him. And damn, so much more. Big things in small run times.