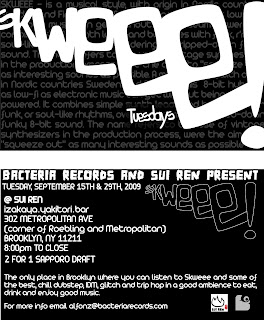 Once again, Sui Ren and Bacteria Records are proud to present Skweee Tuesday! Come out for music, drinks, and delicious food. If you missed out on the first live Skweee event in Brooklyn, now’s your chance to get in on the fun!

The music starts at 8PM and goes till late! Tuesdays are also 2-for-1 Sapporo Draft night (only $4!) so bring a friend!

What is skweee? It’s also called ‘Synthetik Scandinavian Funk,’ and it’s a brand-new type of electro music influenced by funk, R&B, and dancehall (among other things). At this time Sui Ren is the ONLY PLACE in New York City where you can hear skweee live!

If you’d like to know more about skweee,try Spin Magazine’s April 2009 article which examines the origin and rising popularity of this new genre of electro-music–it’s good stuff!