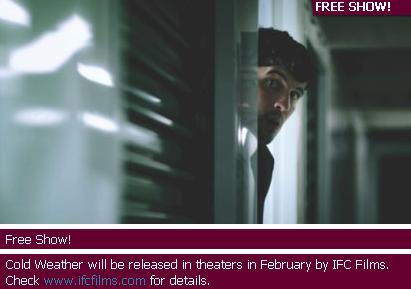 Rooftop Films heads to Chelsea for their first ever screening in Ace Hotel’s Liberty Hall, and they kick off their monthly screenings there with Aaron Katz’s intelligent and exhilarating new indie mystery, Cold Weather. There is no charge for admission and the screening is open to all.

COLD WEATHER (Aaron Katz | Portland | 90 min.)
Filmmaker Aaron Katz is best know for the charming and deeply sensitive dramas Dance Party, USA and Quiet City (which we screened in 2008), and his latest film, Cold Weather, starts with a very simple, patient premise and a languid pace that seems very much of a piece with his earlier work. But in this film Katz has a few new tricks up his sleeve, and when the second act kicks in, it becomes very clear that Cold Weather will not be mistaken for a sedate mumblecore drama.

Doug (Lankenau) has just moved back to his hometown of Portland, Oregon, to move in with his sister (Dunn), hoping for another chance at jumpstarting their grown up lives. When Doug’s ex-girlfriend comes to town unexpectedly, only to disappear shortly after, Doug, Gail, and their new friend Carlos (Castillo) appoint themselves as detectives in what they see as a real life Sherlock Holmes situation.

Like Katz’s previous work, Cold Weather is a very personal film about the fear of growing up and about young people struggling to communicate and find their way in the world. But it is also a classic mystery, a love letter to the city of Portland, a beautifully composed work of cinema, and a bold and exciting step forward for one of independent cinema’s most thoughtful young directors.