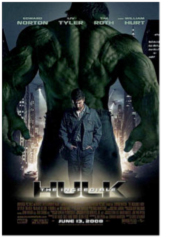 Join 4food for their Super Hero Movie Monday with a free screening of  The Incredible Hulk. The second film to be released in the Marvel Cinematic Universe (currently the fourth highest-grossing film franchise of all time after Iron Man) is based on the Marvel Comics character the Hulk. It stars Edward Norton (who also had both hands in the script) as Dr. Bruce Banner, and establishes a new backstory where Banner becomes the Hulk as an unwitting pawn in a dastardly military scheme.