TCM Free Screening of “All About Eve” 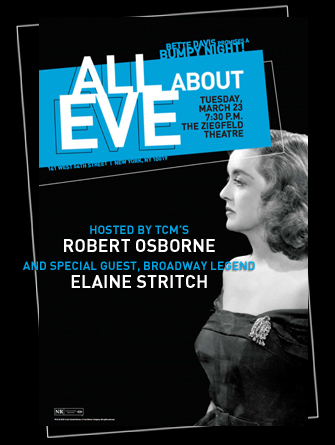 Turner Classic Movies (TCM) is taking its love of great movies to five cities nationwide with the Road to Hollywood tour, a slate of special free screenings building up to the launch of the first-ever TCM Classic Film Festival in Hollywood April 22-25. The network is inviting fans from around the country to join this new festival and share their passion for great movies . This landmark celebration of the history of Hollywood and its movies will be presented in a way that only TCM can, with major events, celebrity appearances, panel discussions and more. The four-day festival will also provide movie fans a rare opportunity to experience some of cinema’s greatest works as they were meant to be seen – on the big screen. Festival passes and additional information are available at www.tcm.com/festival.

Tonight’s Free Screening will be “All About Eve”. The legendary Elaine Stritch (Company) will join Robert Osborne in the Big Apple to present one of the greatest films ever made about life in the theater. Anne Baxter stars as a young actress determined to weasel her way into the world of top Broadway actress Margo Channing, played with gusto by Bette Davis. Celeste Holme, Thelma Ritter, Gary Merrill, Hugh Marlowe, Marilyn Monroe and an Oscar®-winning George Sanders add relish to this outstanding comedy-drama by Joseph L. Mankiewicz.