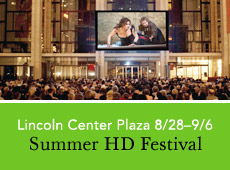 The Met’s popular Summer HD Festival, first presented in 2009, returns on August 28 with screenings of ten productions from the company’s Peabody and Emmy Award-winning Live in HD series. The HD productions will be shown in Lincoln Center Plaza on consecutive nights—for free.

The screenings are free with no tickets required; 2,800 seats will be available each night on a first-come, first-served basis. There are no rain dates. Tonight’s screening will be Doctor Atomic.