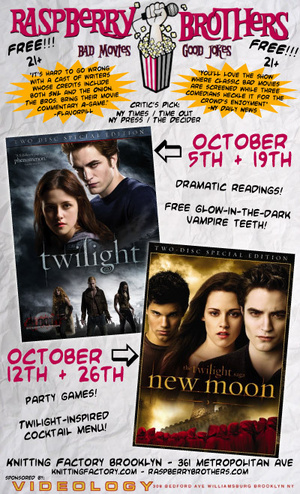 From The Knitting Factory:

The Raspberry Brothers have been mocking the Twilight films since they were released, and the crowds have grown into a wild mix: those who love hating it, those who hate loving it, and those with no mixed emotions- just straight up Twilighters. And they come together for every Raspberry Brothers show, making Twilight into the next Rocky Horror Picture Show, a campy and interactive movie party.

In October we will rock it every Tuesday at 8pm, alternating between Twilight and New Moon, FREE shows…with goodies!

There’ll be opportunities to stake Edward, dramatic readings from the book, free glow-in-the-dark vampire teeth, and of course, expect an awesome Twilight-inspired cocktail menu- with different beverages for Team Edward and Team Jacob.

A Twilight Lesson for girls: If a boy tells you he is homicidal and addicted to the scent of your blood, he must be the love of your life. Learn this and many other helpful romance tips.

Come experience the hype…learn for yourself how surprisingly dull, whiny, self-absorbed, but totally hot, vampire teens are.