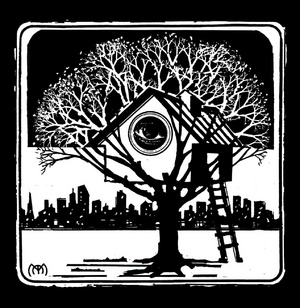 Climb up + get down! TREEHOUSE welcomes Malachai MC Gee of the Bristol duo MALACHAI (Domino/Double Six). A producer and MC duo, they have a sort of pastiche-garage sound that melds multiple styles. They were “discovered” by Portishead’s Geoff Barrow, who released their album, “Ugly Side of Love,” on his own label in the UK last year; and our friends at Domino Records are gonna release said album in the States. Malachai MC Gee will be doing a cool effects/live-on-the-mic/DJ set, an intimate only-at-Treehouse performance that will reward your trip to the Gowanus. We’re thinking the set will lean toward the hip-hop/cut-up/rare groove end of the spectrum, a new branch in the Treehouse.