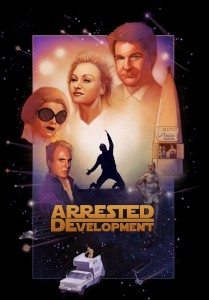 From the Bell House:

Why stay at home and watch tv, when you can come to The Bell House for a TV Party? TV is so much better with a group of like-minded friends. Especially when you’re a super-fan. Arrested Development geeks unite!

Thats right – the famed Bluth Banana Stand is making it’s triumphant return to Brooklyn! Frozen bananas (with chocolate and nuts) on sticks, just like the Bluth’s. . . while supplies last! Eat em while we watch the greatest episodes from each season.

During the series you can expect some live A.D-themed fun like: The Nevernudes, an Arrested Development band. And live magic tricks gone wrong in honor of everyone’s favorite illusionist, Gob! We’ll even have a DJ spinning A.D related tracks! Enter the chicken dance dance-off! Compete in Arrested Development trivia for free drinks and prizes. Drink specials for the serious AD fans. . . .

We’re dedicated to our favorite shows, so many of them cancelled before their time. Flight of the Conchords, Freaks and Geeks, Mr. Show, 6 Ft. Under, Buffy. . .the list goes on. And these deserve to be shown on the big screen. With cocktails. And comedian hosts Jerm Pollet and Michael Austin- the team that has brought you the Raspberry Brothers, Spoons Toons and Booze, and those popular sing-alongs at the Legion.

Each TV Party will honor its theme with special treats. Rare footage will be shown, trivia and quote-alongs for prizes, special guest appearances, and unexpected delicacies.

To quote Henry Rollins and his band Black Flag, from their hit song TV Party, “We’ve got nothing better to do than watch T.V. and have a couple of brews. We’re gonna have a T.V. party tonight!”