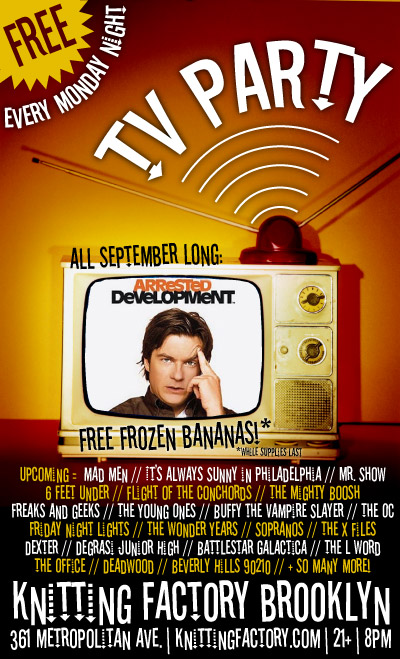 Why stay at home and watch tv, when you can go to the Knitting Factory for a TV Party? September is Arrested Development month, and in celebration we are opening the Knitting Factory Banana Stand! Free frozen bananas (w/ chocolate and nuts) on sticks, just like the Bluth’s…while supplies last! Eat em while we watch the greatest episodes from each season.

During the series you can expect some live A.D-themed fun, like: The Nevernudes, an Arrested Development band. And live magic tricks gone wrong in honor of everyone’s favorite illusionist, Gob! And DJ Fangbat will spin A.D related tracks!

TV is so much better with a group of like-minded friends. Especially when you’re a super-fan. So, from now on Monday is officially a TV Party at the Knitting Factory. TV geeks unite!