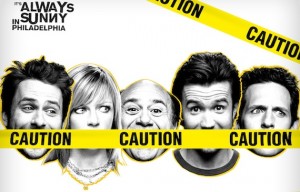 From The Bell House:

It’s Always Sunny…is the best thing to come out of Philly since the cheesesteak. And we’re gonna show our sister-city some brotherly love by transforming the Bell House into Paddy’s Pub, canned wine and all!

Join us for the TV Party that’s going to celebrate those five depraved underachieving bar owners in the best way we know how, by showing our favorite episodes as they were meant to be seen…on the BIG SCREEN — including lyrics on the screen during the Day Man musical for a group sing-along! Plus we’ll be honoring “The Gang” with themed-treats and activities like…

A live performance by an IASIP tribute band performing Day-Man musical hits and songs from the group, Chemical Toilet Free admission for those in full Green Man outfits IASIP trivia contest for prizes and free drinks Character impersonation contest Rat smashing contest Beirut Beer Competition Prizes from The Bell House including free tickets to upcoming shows! Plus rare footage of Danny DeVito and all the actors in other projects!

TV is so much better with a group of like-minded friends. Especially when you’re a super-fan. TV geeks unite! Hosted by Brooklyn comedians, Jerm Pollet and Michael Austin – the team that has brought you the Raspberry Brothers, Spoons Toons and Booze, and Sing-Alongs (the 90’s Sing-Along, the Michal Jackson Sing-Along).

To quote Henry Rollins and his band Black Flag, from their hit song TV Party, “We’ve got nothing better to do than watch TV and have a couple of brews. We’re gonna have a TV party tonight!”