TV Party: Jem and The Holograms 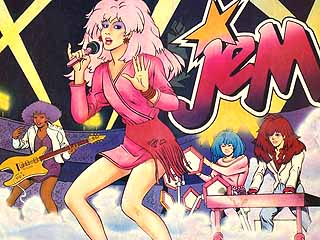 Secret Formula and The Bell House is having a slumber party (minus the sleeping over part) of course you’re invited! And what show would be better for a slumber party than Jem? Jem is excitement! Jem is adventure! Glamour and glitter, fashion and fame! Who could ask for anything more in a Saturday morning cartoon show?

After the success of G.I. Joe HASBRO hired the same ad agency who made that to create a girl version TV show to churn out tons of more toys. What came out of that noble endeavor? Jem and the Holograms! Which, despite its commercial aims, actually turned out to be an awesome TV show with an impressive catalog of original songs, some awesome late 80’s style animation and plenty of hilarious moments (including a drug awareness episode that can not be missed).

sit back and enjoy watching some favorite episodes of Jem while enjoying the nights festivities including:

+Cereal bar featuring only the finest sugar cereals to recreate that Saturday morning cartoon experience
+Live band covering Jem and the Holograms and Misfits classics
+Jem trivia contest for the superfans!
+Starlight Music Karaoke Battle
+Sing-Along with selected songs subtitled on the screen for everyone to sing to
+Costume contest (come in you PJs or come ready to rock out as a member of the Holograms, Misfits or Stingers)
+Makeover station giving Jem or Misfits style make-up designs
+Science lecture on holograms…how do those earrings work?!
+Themed drinks including the Starbright, Jerrica Benton, The Stingers, The Starlight Girls and more!
+Prizes from The Bell House including free drinks and tickets to upcoming shows!