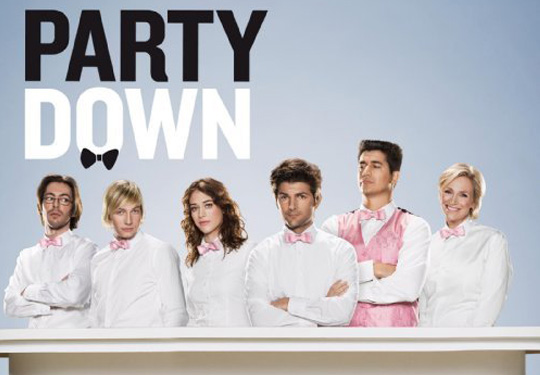 Wear your cleanest white dress shirt and pink bow tie, and bring an appetite ’cause we’re throwing a catered TV Party- A Party Down TV Party! Of course this show got cancelled after only two seasons, earning it immediate cult status like Arrested Development and Freaks and Geeks, as Party Down was just too f*%kin’ funny to stay on the air commercially. But, leave it to Secret Formula and the Bell House to bring it back, this time on the big screen, with adult beverages, and catered snacks (caterers CAN eat off the trays)!

Speaking of Freaks and Geeks, Party Down stars the genius Martin Starr (Bill Haverchuck!) and Lizzy Caplan (Sara). Party Down also includes cast-members Jane Lynch (Glee), Adam Scott (Parks and Recreation), Ken Marino (The State, Childrens Hospital), was created in part by Paul Rudd and is directed by Fred Savage from the Wonder Years…dang that’s a lot of talent!

There will be drinking games, trivia contests, acting auditions, a guess-the-appetizer challenge, and a Party Down menu of themed cocktails like the Ron Donald, the Pepper McMasters, The Jackal Onassis, and the Sin Say Shun.