TV Party: The Flight of the Conchords Sing-Along II 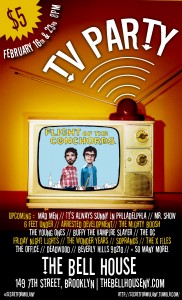 There’s no denying New Zealand’s number one cultural contribution- the comedy musical folk duo phenomenon, Flight of the Conchords.  They’re the best thing to come out of New Zealand since…sheep?

Join us for the TV Party that’s going to show those cocky Aussies once and for all who is the best.  Featuring our favorite episodes as they were meant to be seen…on the BIG SCREEN- with the lyrics on the screen during the songs for a group sing-along!  Plus we’ll be celebrating those two kiwi cuties with themed cocktails (like the kiwi martini), treats and activities like…

Live performance by The Mutha’uckas, FOTC Tribute Band
A Hiphopopotamus vs. Rhymenocerous
freestyle battle
Flight of the Conchords Trivia Contest
Kebab stand serving late night desserts on sticks (a free one goes to the most beautiful girl in the room)
Doggy Bounce Dance-Off
David Bowie Impersonation Contest (Which Bowie will you be?)
Take a tour with DJ Murray of the fabulous gazebos and band rotundas of NYC!
Prizes from The Bell House including free tickets to upcoming shows!
Plus rare footage of Brett and Jermaine in other projects!