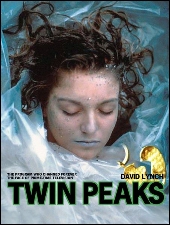 Who cast a spell on NYC, the Log Lady? The TV Party audience has insisted that we bring FBI Special Agent Dale Cooper, Sheriff Harry S Truman, and beautiful dead homecoming queen Laura Palmer to the big screen in Brooklyn…and who are we to stand in the way of a supernatural curse?

So, Secret Formula gladly submits and presents to you, TV PARTY: TWIN PEAKS – BEST OF SEASON 2!

Why stay at home and watch TV, when you can go to the Bell House for a TV Party? There will be themed cocktails (The White Lodge/Black Lodge, The Red Room, The Leland Palmer), party games, team trivia for prizes and Twin Peaks influenced ridiculousness galore.

We’re transplanting the Bell House to a creepy logging town in rural Washington, where a beautiful naked corpse awaits discovery. And just like the show, this event will be full of campy mystery. Along with our favorite Twin Peaks episodes, we’ll be doing some of this…

– Cherry stem tying contest (You gotta use your mouth!)

– Doughnuts and coffee as well as pie from Geek Treats