WHO WANTS TO KILL JESSE AT SOCRATES SCULPTURE PARK 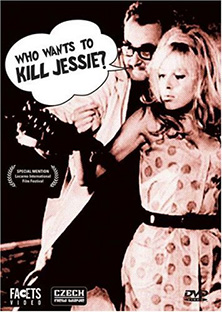 The EPIX Movie Free-For-All continues on Wednesday at Socrates Sculpture Park with Who Wants to Kill Jesse. There will be live music starting at 7:00 and the film will begin at 8:30.

WHO WANTS TO KILL JESSIE
CZECH REPUBLIC
1966, 91 mins. Directed by Václav Vorlícek. A scientist (Dana Medricka) invents a machine that allows her to view a sleeping person’s dreams in this wacky 1960s comedy from Czechoslovakia. But when she tries it out on her husband (Jiri Sovak), she discovers he’s dreaming about the hot heroine of the comic strip “Who Wants to Kill Jessie?” Worse yet, Jessie (Olga Schoberova) soon comes crashing into their lives for real – throwing them into a cartoon world of good guys and bad guys. (Not Rated)