Win Free Tix to Sing For The Cure: A Benefit Show 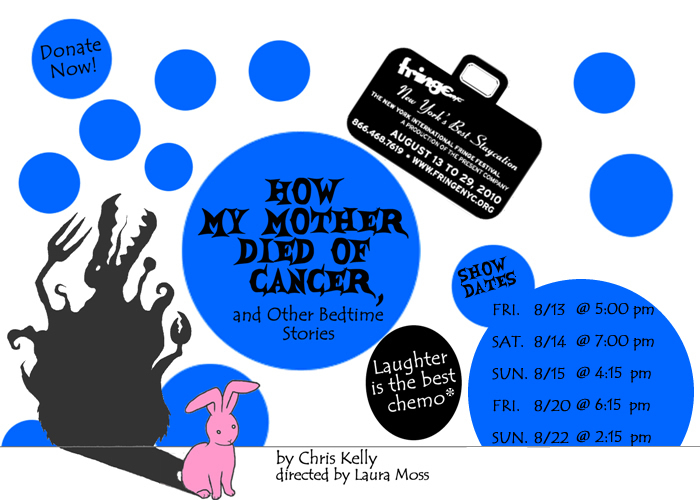 It’s that time of the year again for the awesome Fringe Festival. This year we are lucky enough to be able to give away a pair of tickets to the Sing For The Cure: A Benefit Show happening Sunday August 15, 2010 at 8pm.

About the Sing For The Cure:

The concert will feature the talents of Russell Fischer (Jersey Boys) Taylor Frey (South Pacific, Finianʼs Rainbow), Rory OʼMalley (…Spelling Bee, The Motion Picture
“Dreamgirls” and co-founder of Broadway Impact), Julie Reiber (Wicked, Brooklyn, All
Shook Up), and Tommar Wilson (Wonderland, HAIR). The event will be hosted by Josh
Hemphill. Tickets are $14 plus a 2 drink minimum (Cash Only). For Reservations call 212-757-0788 after 4:30pm daily or visit http://donttellmamanyc.com/reservations.php .

How My Mother Died Of Cancer, and Other Bedtime Stories, inspired by Kellyʼs real-life
loss of his mother and including elements of his own experience, reflects humorously
and sometimes uncomfortably on the effects of death on a family. Structured as a play
within a play, it depicts a group of loved ones trying to cope with a matriarchʼs absence,each othersʼ presence, and the complications that ensue when competing versions of the same life story are told. Part tragedy, part comedy, and part eulogy, the piece strives to take the audience on a revealing and personal journey through diagnosis, treatment,funeral, and everything after. For tickets ($15 – $18) click here.

Robert Intile, Jr. and Alina Gutiérrez are a New York City based producing team. Their current projects include How My Mother Died Of Cancer, and Other Bedtime Stories (2010 New York International Fringe Festival) and Trails (2010 New York Musical Theatre Festival).