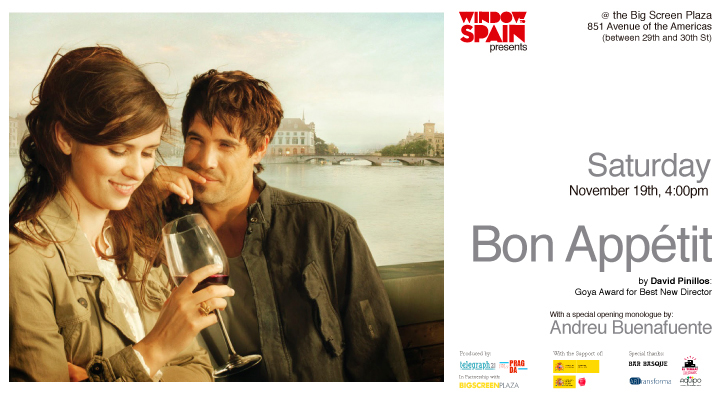 Come out to Big Screen Plaza for a special screening of the foreign film Bon Appetit.

This screening is preceded by a special presentation by popular Spanish TV showman and comedian Andreu Buenafuente from the successful late night show “Buenafuente,” in collaboration with his production company, El Terrat.

The event is free and open to the public.

Window to Spain is a free 6-month summer cinema experience at the Big Screen Plaza in Chelsea, New York. Bringing a diverse selection of the best in Spanish contemporary art and film, Window to Spain turns this screen into a direct flight to Spain.

Window to Spain is co-produced by Telegraph21 and Pragda. Screenings are shown in partnership with Big Screen Plaza and with the support of Spain’s Ministry of Culture and the Consulate General of Spain New York. We would like to give special thanks to El Terrat, ARTransforma, Bar Basque, and Aquipo.

Pragda
After five years of promoting, exhibiting, distributing and programming films in Spanish throughout the US, Pragda has become one of the most innovative promoters of Spanish films. www.pragda.com

Telegraph21
A curatorial project and digital magazine showcasing documentary films and art videos, its goal is to spotlight award-winning and emerging media producers and to provide an ongoing platform for them to promote their work and interact with viewers. www.telegraph21.com