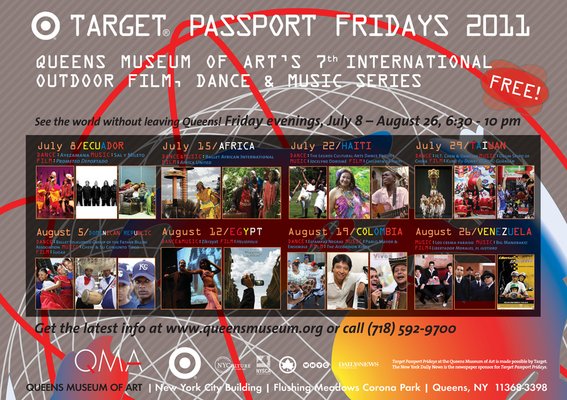 Leave your baggage at home and bring a picnic blanket out to Flushing Meadows Corona Park for the Target Passport Fridays at the Queens Museum of Art International Outdoor Film, Dance and Music Series. This week QMA celebrates Africa!

Ballet African International is an internationally touring dance and drum ensemble from Queens under the direction of Director/ Choreographer, Amina Heckstall and Damon Foster. Since 2005, the company has stood for conserving, innovating, and teaching the cultural arts of The African Diaspora. They will perform “Listen For The Drum Call,” in which the African Ancestors through the drum’s sound have come to return a child home to Africa. The drum call alerts the community to the beginning of a celebration, ceremony, or rites of passage. The dances are inspired by the movements of forest animals and the work of women in the fields, transporting audiences to the time of tradition and ritual in Africa.

Africa United (Debs Gardner-Paterson, 2010, Rwanda/South Africa/UK, 88min, English)
The extraordinary story of three Rwandan kids who walk 3000 miles to the 2010 Soccer World Cup in South Africa. They set off through the endless horizons of Africa in pursuit of an unlikely dream. And as they walk they gather a ragamuffin team of broken and brilliant characters who help them negotiate a way through a series of glorious, dangerous, hilarious and often bizarre situations through seven countries.