Battle of the Boroughs Talent Quest 2011 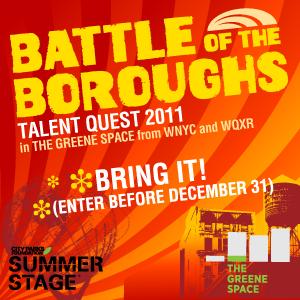 Got talent?
Be a part of Season Two of Battle of the Boroughs in The Jerome L. Greene Performance Space at WNYC and WQXR— the unique talent series for the best up-and-coming performers in New York City. Last year, over 168 artists and 45 groups from across the five boroughs performed in in The Greene Space and were webcast live to the world.

Sign up!
You can sign up and submit a sample of the work you would like to perform here. All entries must be received no later than December 31st, 2010 at 11:59 PM.