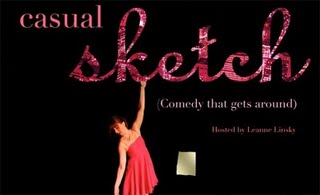 Casual Sketch is a comedy show and open mic for comedy writers.

They invite everyone: sketch writers, character actors, storytellers, stand-ups, and comedy video producers to perform. It’s an open mic of sorts in an amazing and supportive environment.

It’s the perfect place for artists to try out their latest works.

And it’s a different show every time!

Of course, we love an audience. So join us and see it all here first!

It’s comedy that gets around.