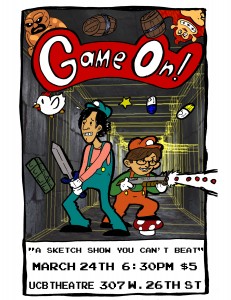 Come out this Thursday to UCB to see two brand new sketch shows. These shows have never been performed on the UCBT stage before. This week will feature the new sketch called GAME ON!

WARNING! An accident during your tour of the National Video Game Museum has left you stranded in VideoLand, home of all video game characters! To escape you must listen to your guide and follow his instructions. Good luck! And remember, do not feed the Kongs!