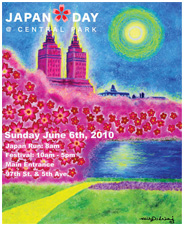 Marking its fourth year as a New York City tradition, Japan Day at Central Park will return to fill the green oasis of East Meadow with tents offering a wide range of Japanese traditional and family-friendly activities, free samplings of popular Japanese cuisine and powerful stage performances throughout the day, with top entertainers from New York and Tokyo. As in previous years, Japan Day is planned to kick off with the Japan Run, a mini-marathon, at 8AM, followed by the Japanese Day Festival in the East Meadow at 10AM with the opening of all activity tents and the stage show. And because 2010 marks the 150th anniversary of the First Japanese Diplomatic Mission to New York, there will be special activities to commemorate this historic milestone.

To learn more about Japan day chek out their website.