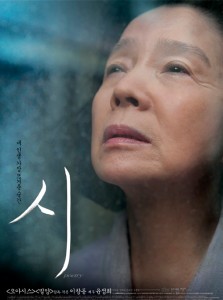 The Korean Culture Society continues its Free Korean Movie Night with a Free Screening of Poetry. All seating is first-come, first served.

Lee Chang-dong (Secret Sunshine, Oasis, Peppermint Candy) delivers yet another big screen triumph with Poetry, a movie which also marks the return to the silver screen of acting legend, Yoon Jeong-Hee, who has been retired since 1994. In Lee’s film, she plays a 67 year-old grandmother, taking care of her loutish grandson and barely scraping by with a series of odd jobs. As the movie begins, she has been given a diagnosis of Alzheimer’s disease and so she enrolls in a poetry class in an effort to sharpen her mental faculties and delay the advance of her dementia. Simultaneously, a young girl who lives in her neighborhood commits suicide and slowly, in Lee’s expert hands, the strands of this narrative — a brute of a grandson, a tired old woman, poetry, suicide, senility — all come together to deliver yet another of Lee’s enormous, epic, subtle, sprawling portraits of the world. It’s a movie that should be compared to a novel for all of its elegance and depth, but that is also, truly, cinema: a story that could not be told any other way but in enormous, illuminated images.