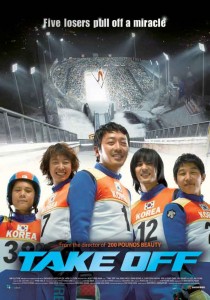 The Korean Culture Society continues its Free Korean Movie Night with a Free Screening of Take Off.

Synopsis of Take Off:

1997. Muju, Korea. In an effort to bring the 2010 Winter Olympics to Korea, the country has to demonstrate that Koreans enjoy the sports of the Winter Olympics. One problem: no one knows squat about ski jumping. No problem, they assemble a team, train them on waterslides and sends them into competition. It¡¯s a true story, and a lot like COOL RUNNING (the tale of the Jamaican bobsled team) but it¡¯s given a distinctly Korean flavor in this popular, mainstream blockbuster that¡¯s the flat-out funniest in this series and that stars four major Korean stars: Choi Jae-Hwan, Ha Jeong-Woo (the killer from THE CHASER), rapper Kim Ji-Seok and Cha Heon-Tae from Korean popular soap opera, ¡°Coffee Prince¡±.