Meet the Actors: Jonah Hill and Russell Brand, “Get Him to the Greek” 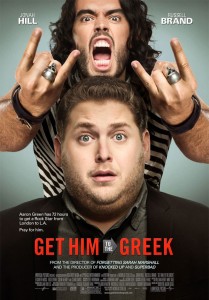