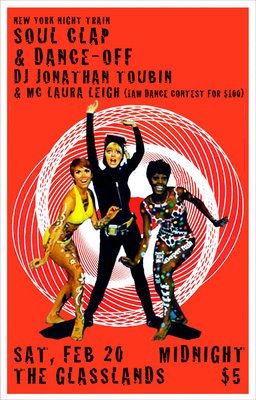 New York Night Train’s most popular party (and contest), the Soul Clap and Dance-Off, which last year broke out of Brooklyn to ping pong back and forth from Portland, Oregon to Portland, Maine, and from Mexico City to Tel Aviv, returns to its Glasslands Gallery home Saturday. As always, this month’s Soul Clap will feature all-night dancing to the exquisitely dynamic 45rpm ’60s soul magic of New York Night Train soul proprietor Mr. Jonathan Toubin (just back from a Mardi Gras tour of the south!)- plus a 1AM Dance-Off for a $100 grand prize presided over by the lovely MC Laura Leigh and a distinguished panel of judges consisting of the following pillars of the local community (please follow the links and support their noble endeavors):

Also, don’t forget to follow Mr Toubin to afterhours at the Badlands after the jam…