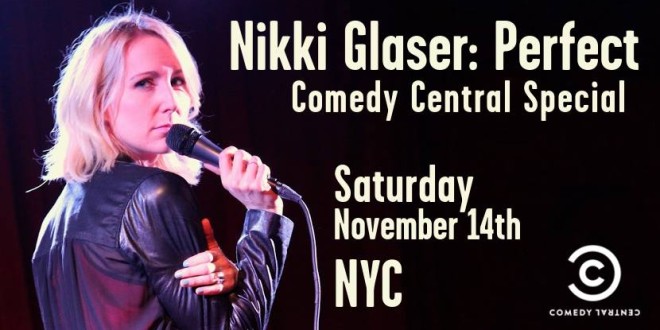 Comedian Nikki Glaser is taping his second comedy special for Comedy Central here in NYC and The Blacklist is offering Free tickets.

Nikki Glaser is not only writing what you are reading right now, but soon, she will be shooting her first hour special which will air alongside her future smash hit Comedy Central series, Not Safe with Nikki Glaser! Join Nikki as she records an hour of stand up that is bound to change her career forever. Glaser has been honing her honest, whip smart style of stand up for the past twelve years, which doesn’t make sense since Glaser looks 22, tops.

You may recognize Nikki from her regular appearances on @Midnight, Inside Amy Schumer, Last Comic Standing, The Tonight Show with Jay Leno, Late Night With Seth Meyers, and CONAN. She was also pictured on the second tier of the human pyramid seen in US Weekly, which also featured Amy Schumer and Jennifer Lawrence. You may not recognize Glaser from MTV’s Nikki and Sara Live (a hilarious talk show, which Nikki co-hosted for two seasons), The Bachelor After Paradise finale, and The Bethanny Frankel Show (RIP).

Glaser recently moved from NYC to Los Angeles to write and shoot her upcoming Comedy Central series and to feel worse about her body and soul, but she demanded to return to New York for this taping. And she wants to see you in the audience! Reserve your complimentary tickets now!