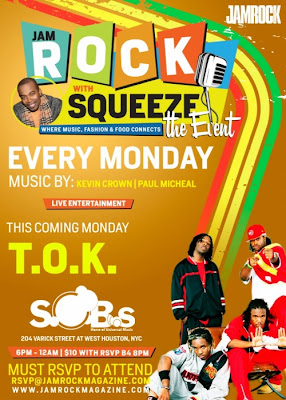 ROCK with SQUEEZE at S.O.B.’s is the premiere networking afterwork hotspot for industry tastemakers, professionals and lovers of Caribbean culture. Intimate and entertaining with a beautiful combination of great food, a good musical mix and vibrant people.

Consistently dropping hit after hit, T.O.K has reigned as one of the biggest Dancehall groups to ever come out of Jamaica since busting into the scene in the early 90’s. Known for their eclectic fusion of Dancehall, R&B and Pop, TOK has topped the charts with hits like “Chi Chi Mon,” “Footprints,” and “Gal You a Lead.” This Monday, the dynamic group will hit the stage at ROCK with Squeeze to deliver a performance that you don’t want to miss!