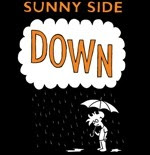 The first film by Lev Yilmaz to screen at Rooftop Films was Richard’s Cash Register, way back in 2004. We were hooked immediately, and hardly a year has passed since that we haven’t shown at least one of his films. Given that, this Rooftop retrospective of Lev’s painfully intimate yet universally hilarious work is long overdue.

Lev began the ultra low-budget comic/animation series “Tales Of Mere Existence” in 2003, based on gleefully embarrassing thoughts and stories from his own life. He self published 3 Comic/Animation sets and had already gathered a substantial cult audience when his YouTube channel exploded in 2007, and has accumulated 11.5 million video views as of May 2009. His first graphic novel, “Sunny Side Down,” was published by Simon & Schuster in 2009.

Our “Tales of Mere Existence” program includes 13 very short works by Lev, as well as a live performance by the filmmaker. We will also be screening 6 additional works by other filmmakers who also divine that humor and insight hidden deep within the tangled strands of their lives.