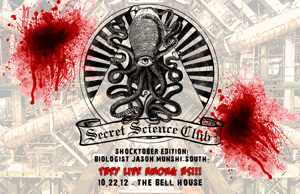 They Live Among Us! For our Shocktober edition, the Secret Science Club explores urban evolution and the wild beasts of NYC with biologist Jason Munshi-South

They stalk. They scurry. They haunt the night!

New York is one of the most heavily urbanized places in the world. And yet . . . alongside the human metropolis-in the parks, beneath the rivers, among hidden groves of old-growth trees-is a clawing, crawling, creeping creature-filled world.

Evolutionary biologist Jason Munshi-South of CUNY has tracked elephants in Central Africa and proboscis monkeys in Borneo. Now he is on the trail of elusive animals living right under our noses and rarely glimpsed by unsuspecting humans. Employing the tools of landscape genetics, population genomics, and field studies, he asks:

–What ecosystems survive in the city, and how are NYC’s parks like the Galápagos Islands?

–What impacts do human activities have on wild populations? Have urban-dwelling species evolved?

–What might studying the genetic adaptations of urban wildlife tell us about human disease? Just as mice are used as models in laboratories, might wild mice be used as models to study how humans are affected by urbanization?

–Try our cocktail of the night, the Creature Feature

–Stick around for the scarily informative Q&A!