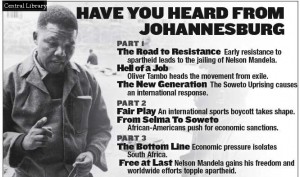 Stop by the Brooklyn Central Library for their  seven-part documentary series Have You Heard from Johannesburg? An international sports boycott takes shape when African teams refuse to compete in the Olympics with South Africa’s all-white teams. Only South Africa’s world champion Springboks rugby team remains on the field. This film is fourth in the seven-part series Have You Heard from Johannesburg? While it is recommended that the films be seen in order, it is not required for comprehension of the series.