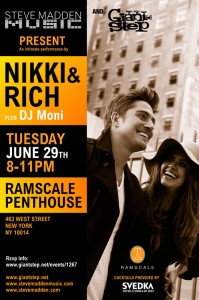 Check out Giant Step with another Steve Madden music event, bringing you intimate performances from the best up and coming Artists. Past events include performances by Katy Perry, Jazmine Sullivan, Chester French, K’naan, to name a few.

On Tuesday, June 29th we will be holding the event at the beautiful Ramscale Penthouse, with a a very special performance by Nikki & Rich showcasing songs from their upcoming debut album. Guest DJ will be , our friend, the illustrious DJ Moni.

Entrance is free but strictly RSVP. Only one guest allowed per RSVP.

Nikki & Rich are singer and songwriter Nikki Leonti, and hip-hop/R&B producer Rich Velonskis aka Rich Skillz. The two met in 2008 while Nikki was singing back up for Carrie Underwood in Nashville, and Rich was producing tracks for the likes Eve and Robin Thicke. The musical chemistry was instant and the duo have been busy creating their debut album in Rich’s LA home ever since. Their debut album, Everything is due later this year.