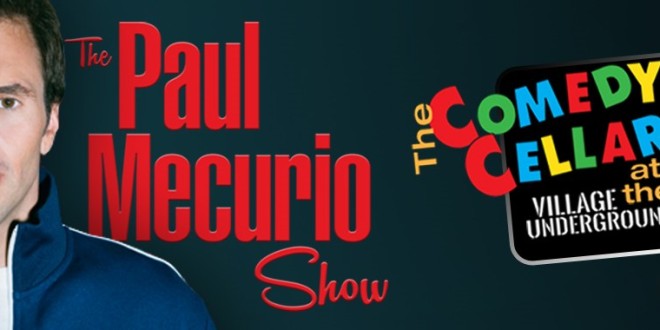 Get free tickets to the live taping of the Paul Mecurio Show featuring an interview & comedy show with special guest: Bobcat Goldthwait. Click here to get tickets courtesy of 1iota.
“The Paul Mecurio Show” is hosted by Emmy & Peabody Award winning comedian from “The Daily Show,” and star of his own Comedy Central Special, ABC, CBS and NBC, Paul Mecurio. This is a cutting edge talk show featuring in depth interviews and comedy with A-list talent in the hottest venue for comedy in NYC, “The Comedy Cellar at The Village Underground.”  The Comedy Cellar has been a staple in the New York comedy scene for over 30 years. This show is being filmed for television. It is unlike any other talk show out there, a blend of revealing talk and really smart comedy.
This weeks special guest is comedian and director, Bobcat Goldthwait from his own Showtime Special, “The Tonight Show,” HBO, Conan O’Brien and “Police Academy” movies.
This show is based on Paul’s hugely popular, highly rated podcast, “The Paul Mecurio Show,” on which he has interviewed such major celebrities as Paul McCartney, Stephen Colbert, Jay Leno, Sugar Ray Leonard, Bob Costas, Lewis Black, Rob Corddry, Kristin Chenowith, Stone Cold Steve Austin, Cedric The Entertainer, Adam Carolla and Gilbert Gottfried, among others. This is a show that is not to be missed! Everyone is talking about Paul’s amazing interviews with these huge names. Be there when Bobcat is added to Paul’s pantheon of great guests.
1iota Bobcat Goldthwait Casting Comedy show Free nyc The Paul Mecurio Show 2014-07-22
+Danielle Clarke
Share !